Dear Amazon: Why Doesn’t This Exist? 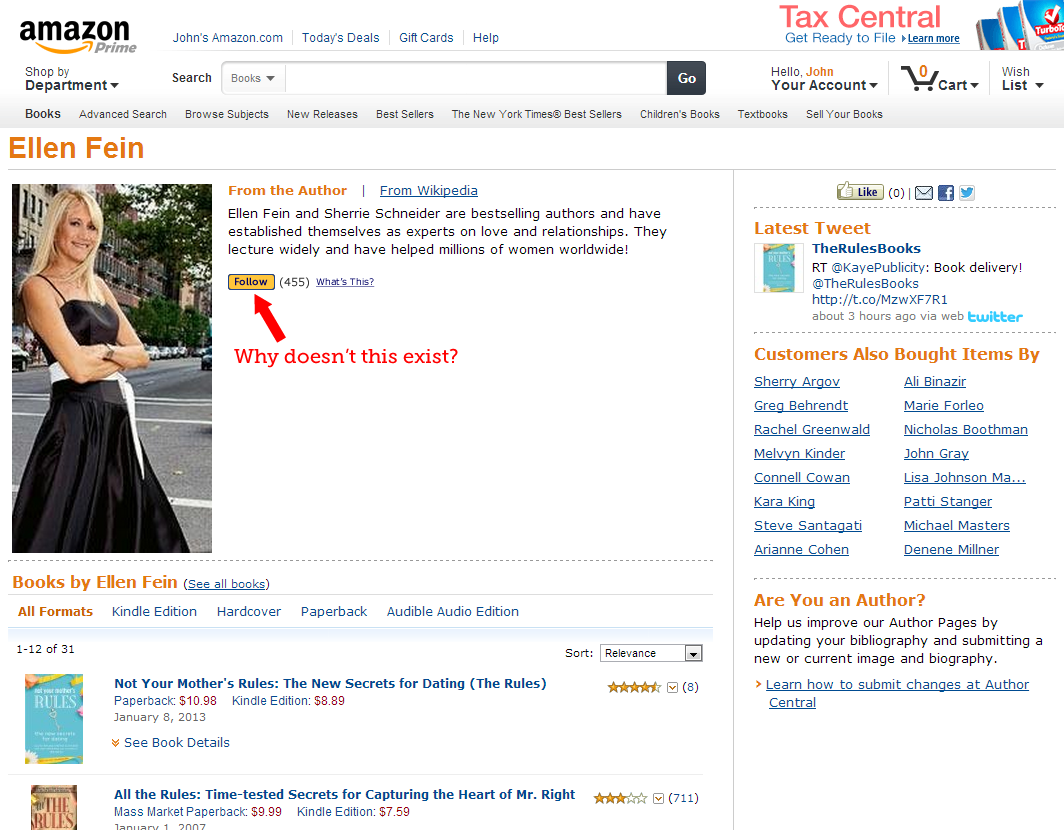 Maybe I am unique.  No, I don’t mean like everyone is a snowflake or anything like that.  I mean maybe I want unique things, or like things that no one else does.  At some level, this fear bothers me, because I at least try to make good things that people will like.  But sometimes, and not as often as it used to be, I am presented by the most glaring absence of something that I have to assume that I am odd for wanting it. After all, if this was so obvious, why hadn’t someone thought of it before?  This is precisely the thought I had on Amazon.com today.

OK, enough preamble.  What led me to this was the absence of this feature: To save you from zooming in on it, “this feature” is a follow feature for artist/author, etc.  To me, this is pretty obvious, and has a very obvious, and I have to think incredibly common, use case.  I’ll walk you though it.

Let’s say you like a band, after all, you probably do.  And, let’s say you would find value in knowing when your liked band’s new album drops.  And, just to extend this a little further, let’s say that the odds of you purchasing said album, or at least a track or two, are greater than 50/50.  That is, you are an engaged customer, you have probably already made a buying choice, and you are just waiting for your opportunity to exercise it.  And, let’s say that I was the biggest online retailer in the world, I knew this about you, and I gave you what you wanted.

The above scenario would make perfect sense to me.  However, the reality is that this function does not exist.  If I am a fan of a particular author, band, or even product, there is no way for me to tell amazon to tell me when something new comes out.   To me, this is bananas.  Especially for bands, this seems like a no-brainer.  The band sells more music because people who are fans know when the new stuff comes out.  And, for the fans, they get it first without having to follow the band on any type of social media.  Win/win!

But, like I said, maybe I am odd.  Maybe I want things no one else wants.  However, this seems like SUCH a simple feature.  This would save me the time of paying attention to every band/author, etc. that I am interested in, which I want, badly.

Case in point, one of my favorite bands released a single (ahead of an album launch) about a week ago.  Want to know how I found out about it?  Pandora.  Yes, Pandora played a song.  I liked the song. I wondered who it was by, because it sure sounded a lot like Band X.  Turns out, it was Band X, and it was new.  It was new, and there was a new album coming, and I had no idea.  And, I have to wonder, how many other people are out there just like me?  Personally, I already receive way too much information in a day to want to volunteer for more, just to capture an event that happens once every couple of years or so.  This sort of feature would address this perfectly.

And if you are amazon, you would have to know that not only would this feature (further) endear me to you, but I would also buy more stuff.  It would give me what I want, when I wanted.  Again, win/win!

But, if only 5% of amazon’s audience is like me, this would still be worth it to build.  That is what is so baffling.  This seems so simple, and it could have so many extensions (a new, possibly better, recommendation data source, for starters) that would ultimately drive more sales.  I don’t know.  Maybe I am just weird.