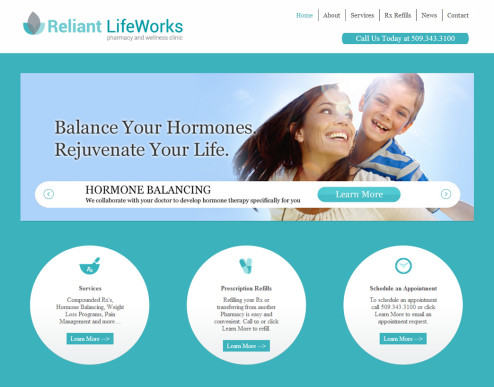 This one was challenging from a couple of regards.  First, it was one of our first more complex responsive projects.  For example, the circles on the home page were really hard.  For SEO reasons, we did not want to just embed the text inside the circles into graphic (even though that would have been, roughly, a bazillion times easier).  Instead, we worked to get the positioning right so that the text appeared correctly, even down to smartphone devices.

The site also had a few other unique challenges.  First, their is some Google maps integration that took a couple of tries to get right.  Additionally, there are social feeds, a couple of contact forms, and sundry other (fairly standard) features.

The most interesting thing about this project was what we learned about responsive development.  Having to match PSDs on a fixed-pixel site is hard enough, but doing it across multiple device form-factors (down to tablets and smartphones), that was a different thing.  However, as with most things we learn from projects, the education was extremely valuable.